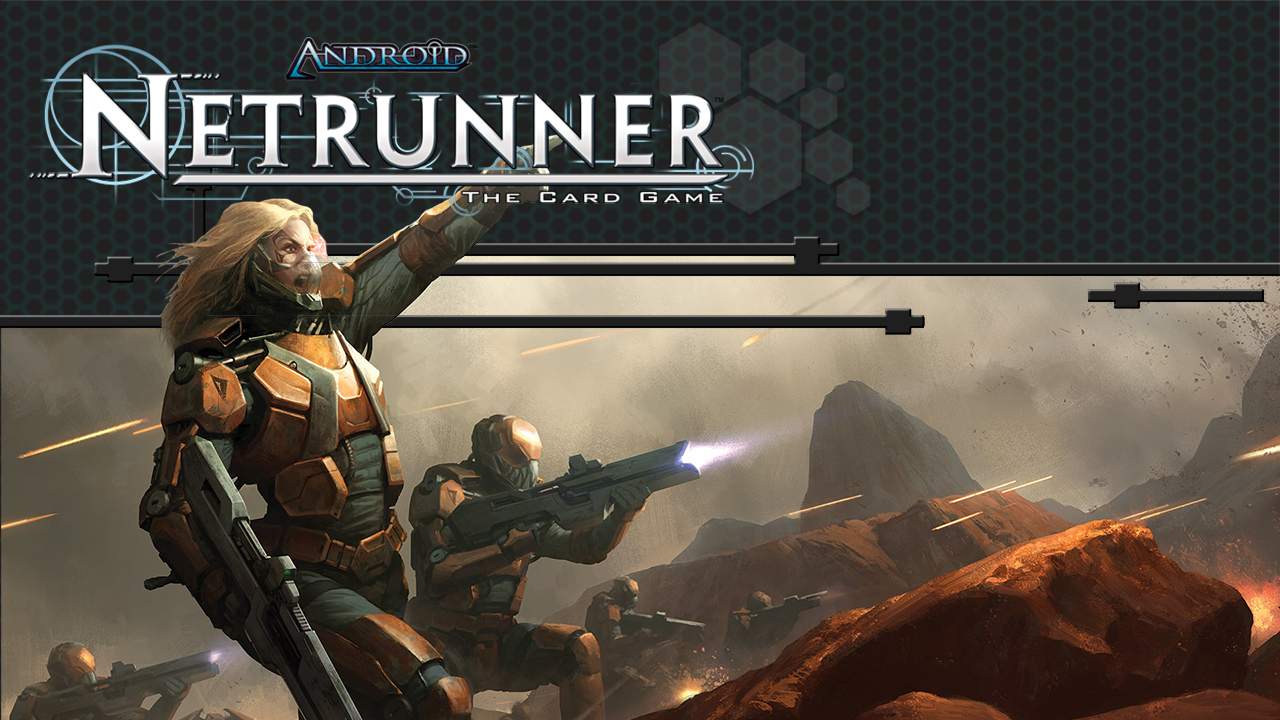 Android: Netrunner is a player-versus-player card game where two players go head to head, playing as one of the omnipresent megacorps trying to protect its servers and one of an elite group of hackers known as netrunners trying to infiltrate those servers and steal the corps’ secrets. It is a relatively fast paced game (assuming both players know the rules) of corporate intrigue and espionage.

It is also my latest and newest obsession.

It’s a little hard for me to explain why; as I pick up various card games – I’m also in the progress of learning another Fantasy Flight card games, A Game of Thrones The Card Game Second Edition, which I’ll chatter on about later – Netrunner is the one that’s stuck out to me the most. It’s the one I’ve currently invested the least in, having picked up only a single core set and one Data Pack, but it’s the one I’m most interested in sticking with.

Perhaps one of the primary reasons is the asymmetrical nature of the game; whereas with most other card games both players have a play area that looks somewhat the same because both players have the same features to their deck, Netrunner has the corp player playing and protecting servers that array out across the board with protective software that plays up and out from server in a very structured, gridlike fashion that reminds me of nothing less than programmatic arrays. The runner player, meanwhile, cobbles together a haphazard collection of hardware, software, and resources to use in their attempts to throw everything they have against the sinister and underhanded corps in an almost chaotic attempt to break through the defenses arrayed before them. There’s something I find really fascinating about Netrunner’s asymmetry.

The asymmetry plays well into the theme and setting of the game – Fantasy Flight’s ever growing Android universe. I was always a fan of Shadowrun but the more fantasy-based elements never sat the best with me; I grew up with the works of William Gibson and Phillip K. Dick frequently fluttering in front of me as I sped through as many books as I could and I always wanted more. The universe of Android has given me more in a way few other cyberpunk settings have – so much so that I own all the novels put out by Fantasy Flight and simply devoured them.

Android, simply put, is a universe depicting a dystopian near-future dominated by these megacorporations, one that lays this dark and dreary world at the feet of people just trying to get by and asks a simple question: what are you going to do about it? The novels primarily frames the world through the lens of mysteries, the protagonists police detectives with burdens of their own their get dragged a little too deep into the shadow games played by the corps. Sometimes those detectives are humans, sometimes they’re the clones and bioroids that give the universe its name. But all too often they’re faced with a quandary that tests their morals and demands to know if they’re just going to take their beating sitting down.

Netrunner – adapted from a game originally designed by Richard Garfield for the Cyberpunk 2020 setting – answers the question in different ways, presenting one player as the soulless corporation that has decided to profit at any cost and the other as one of the underdogs fighting back against that oppression. It’s this merging on mechanics and theme together that really makes this game for me.

And so, Netrunner will be becoming one of the games I write here regularly about as I expand my collection and figure out more and more just how, exactly, I can win a few rounds of this game. Will my NBN deck manage to track down and eliminate the runners before they can infiltrate my servers and plunder the priceless data within? Will my Shaper deck manage to find a way to turn my Magnum Opus into the means of successfully pilfering information from the evil corporations?

Only time will tell.