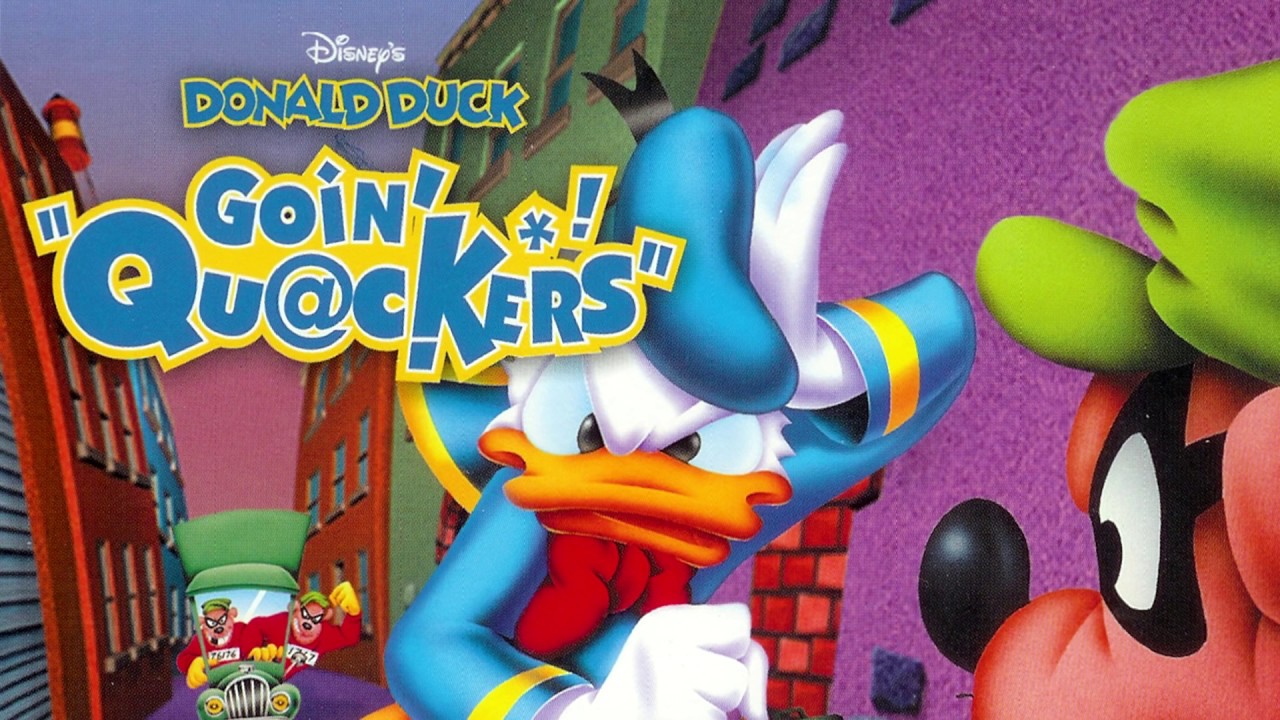 I never said when I started this series all these games would be good. In this case, you might even call it… fowl?

All right, I’ll kill the duck puns before I even get started, otherwise we might actually go quackers. Once again, I substituted a game in at the last moment for this entry – I had plans to take a look at a Playstation 2 game only to discover that my capture setup for the PS2 isn’t conducive, at the moment, to taking screen shots so I need to examine it a little better before doing entries for games from physical hardware. So, instead, we’re taking a look at Donald Duck “Goin’ Quackers” for the Nintendo 64 (if you’re from Europe, you might know it as Donald Duck: Quack Attack instead).

I really need to start this off with a disclaimer outside my usual one: I am really not a fan of platformers. For the most part in my regular game time, I try to steer clear of them outside a few exceptions which are heavily recommended to me (puzzle-platformers like Celeste) or as part of a genre or series I enjoy (such as in Metroidvanias). So, my particular views toward this game are likely skewed from the get go – but I tried to give it an honest chance.

The other disclaimer: this playthrough was done using an emulator. All screenshots were captured using the Mupen64Plus core on RetroArch set to fullscreen with a 4:3 aspect ratio, giving a resolution of 1280 pixels by 960 pixels. The images were then scaled down while being put into the article to fit the layout better.

Before even getting to actively play the game, we get a little bit of story – Daisy is off doing reporter duty and gets captured by Merlock the Magician (the villain of probably my favourite duck-themed animated movie for the early 1990s). So, Donald sets off on a grand adventure around the world to rescue her from the magician’s evil clutches. Yeah, that’s about what I was expecting storywise – now let’s get to some platforming.

What follows is a romp through sixteen levels divided into four areas, each of which also has a chase sequence level and a boss battle. Each area follows a fairly strict style – one Crash Bandicoot-esque runner level, two side scrolling platforming levels, and then a final Crash-styled runner level. In each of those levels you’ll be looking for a single piece of the boss transporter (which will unlock – wait for it – the boss battle when you collect them all) and three toys belonging to one of Donald’s nephews (which one varies based on the area). Each of the areas follows this particular hub style.

The Crash-styled levels are fairly interesting though suffer from some of the issues of early 3D platformers – occasionally, for example, you’ll find it difficult to judge exactly where you’re going to land until it’s a bit too late or distance will be misjudged. I actually enjoyed these levels more than the side scrolling levels (aside from having to witness the dance Donald does every time he picks up an item from the rear) though they’re not super engaging as, for the most part, they’re rather basic with the primary difficulty being the problems mentioned above.

The side scrolling levels, though, I found a bit dull. They’re not particularly inspired for being this far along in the life span of platformers and are filled with pretty standard and uses the old standbys of pretty much every platformer by this point in video games – pits, falling and moving platforms, timed segments, only mildly threatening enemies, and so on. There wasn’t anything about them – to me anyways – that made them particularly compelling.

Now – let’s have a talk about the bonus chase sequence level.

Should you find all three toys in each of the four levels, you can talk to the triplet who happens to be in your current hub and get access to the chase sequence level. These range from a bear that Donald rudely awakens in the first area to a truck that barrels after you down an alley in the second zone to a magical hand that crawls along the corridors behind you in the third area. Unfortunately, I didn’t manage to get a chance to play the final chase sequence in the fourth zone – the screenshot you see above on the far right is as far as I managed to get as I lost my last life during the final level of the zone and then discovered that there was no auto-save and I hadn’t had any progress saved.

These levels play like the Crash-styled levels but in reverse. Instead of running from the “front” of the screen to the back, you’re being chased the other way – whatever the threat for this particular zone is will chase you towards the front of the screen. You’ll need to constantly pull the analog stick towards you to keep moving and you’ll encounter any number of tricks and traps from the zone’s four levels in your way. These levels, without a doubt, were the most engaging part of the game for me. The level styles force you to react quickly as you only see the threats coming towards you from the bottom of the screen briefly before you have to react to them; with the threat of something chasing you, there’s only a small amount of time to take in what you’re facing and react. That’s not to say, however, these levels were super challenging but they were the ones that held my attention the most.

Bosses were, sadly, a little hit or miss. Each boss has three phases – each phase is simply just a more difficult version of the first phase. The third phase of some bosses almost feels a little like bordering on unfair, requiring fairly snappy reaction times to avoid mechanics but are still doable. While definitely the hardest part of the game, bosses became a little rote moving through phases and hoping one of the mechanics didn’t blind side me (though the third boss, Magica de Spell, was actually rather clever and I enjoyed it quite a bit).

I do need to briefly mention sound – each zone has it’s own musical theme and soundscape that starts off low key in the first level of the zone and is joined by more elements as the zone progresses. It was subtle enough at first that I didn’t notice it until the third zone but it was a pretty cool effect with the boss getting the full bombastic version of the zone’s music. Additionally, there was actually digitized sound clips in the game; if you’ve read my look at Harry Potter and the Sorceror’s Stone, you’ll know I have a certain affectation towards these sorts of early attempts at voice acting within the storage constraints of the time and this game doesn’t let me down there. The voice quality is actually pretty good, all things considered.

So, I dislike platformers – I established that early. What did I think of this game? I don’t think it was, necessarily, a bad game over all. It was just, in my opinion, a little over simple in the level designs. I wouldn’t hesitate to offer this as a suggestion to anyone younger or just starting with platforming style play by more veteran players would likely agree with me that the game falls a little flat. It’s colourful in the way that a Donald Duck game should be and there’s a certain amount of fun that derives from that. But if you’re looking for any challenge or more than a quick diversion, I’d likely recommend you look elsewhere for your platforming fun: even when the game was current, there were better and more challenging platformers.

Thanks for reading and hope to see you back next week.